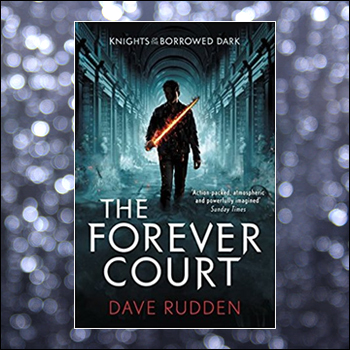 Life is returning to normal for Denizen Hardwick. Well, the new normal, where he has to battle monsters in quiet Dublin bookshops and constantly struggle to contain the new powers he has been given by Mercy, the daughter of the Endless King. But Denizen may need those powers sooner than he thinks – not only are the Tenebrous stirring again but the Order of the Borrowed Dark face a new threat from much closer to home. An ageless and rage-fueled darkness is rising, and a forgotten family has answered its call for vengeance.

Knights of the Borrowed Dark: ★★★★✩

I had such high hopes for this one too! I was really excited to see where Denizen’s story, and the exploration of the world of the Tenebrae was going to go next, but the last place I expected or wanted the story to go was backwards. Which is exactly what happened here. New characters and points of view were introduced here that dragged the focus off of Denizen in a way that made it difficult for me to feel emotionally connected with the material.

One of the things about Middle Grade is that it’s meant for younger audiences. Tweens and young teens who are just getting invested in reading full novels. I wrote about some concerns I had with the previous book feeling a bit overwritten, considering its audience. Well, consider that complaint redoubled here, as brand new characters start introducing a storyline about the history of magic in the world, as ancient goddesses start betraying each other, while a cult is rising and a magical summit between the Knights and the Tenebrae is threatened. It was just way too much.

I was totally lost for roughly 60% of the book, trying to figure out what was going on with the cult and all the new characters. If I got lost, I can only imagine how difficult it would be for younger audiences to connect to the material.

I don’t mean to diminish Dave Rudden’s talent, because he’s got an exquisitely lyrical writing style that I quite enjoy, but I have to rate the book in consideration of the genre it’s been placed in. This might work better if it had been an adult series, geared towards adults that are ready to scour the material for hidden connections to ancient Gods and wars, but for Middle Grade it’s just overly complicated.

Not to mention that my complaint about the darkness of the first book still stands and perhaps becomes more poignant with this entry in the series. Again, this is a book written for tweens and young teenagers, but the stuff going on is pretty horrific. There are themes of religious fanaticism, cultish behavior and child abuse that didn’t sit well with me, coupled with a few overtly violent scenes and the threat of decapitation at one point too.

I don’t know if kids are just built from more hardy stock these days or what, but even if they were I don’t necessarily think we need to throw total darkness at them in story form either. One issue I took with this book is that there are no happy, uplifting moments to celebrate in here. It’s all gloom and doom and quite frankly, depressing. At least the first book had Denizen’s introduction to the magical world to keep things exciting and uplifting. Here, that’s been stripped away and what’s left behind feels needlessly devoid of hope.

I really think that if Rudden were to shift and start telling stories about adults living in this universe, written for adults I would absolutely love it. The dark imagery is cool, and I still enjoy the monsters in this world but I don’t really feel connected to it anymore.

Thank you to Netgalley, and Penguin Random House UK Children’s Puffin for an ARC of this book in exchange for an honest review!

What series have let you down? Do you often give series a second chance?

10 thoughts on “{ARC Review} The Forever Court by Dave Rudden”