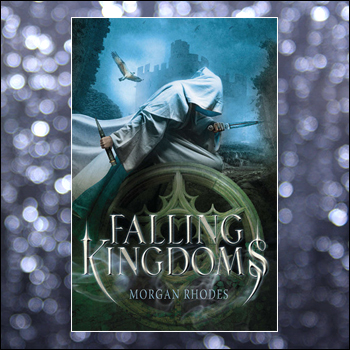 The three kingdoms of Mytica are suffering. Magic has fled the land, and while peace still stands a divide between the three separate provinces grows. As the rules of each land vie for power, the lives of their people will forever be changed. Four people in particular find their fates intertwined in the growing unrest. Cleo, Jonas, Lucia and Magnus become caught in an ever-expanding web of lies, alliances, betrayals and murder.

Who will emerge victorious when everything they once knew has collapsed? In the eve of war, they each must choose a side; and their choice could mean the difference between life and death.

This was not good.

You know how sometimes the media latches onto trends – hint, they do this all the time – and suddenly when one specific type of story starts getting popular a whole bunch of knock offs with similar stories start appearing? I truly believe that this story would not have been published had Game of Thrones not become a smash hit the year before its initial publication. Or at the very least, not without substantial rewrites.

I really wanted to like this, but I can’t remember the last time I’ve come across a mainstream and acclaimed book that was quite so poorly written. We’ve got to talk about some things fam.

For starters, the characters are totally flat, and almost wholly unlikable. The story alternates between various points of view characters each chapter, and one thing that struck me about this was that every single character sounded exactly the same! If you’re going to write a story from multiple perspectives, you’d better be sure that the characters all have a unique voice and perspective on the situation, otherwise what’s the point?

Also, why in the name of all that is holy would you write a book in a fantasy setting and then have the narrative and character voices speak in a contemporary fashion? There were so many modern colloquialisms thrown in here that I couldn’t hear anything but Morgan Rhodes’ keyboard furiously typing out the first draft of this story, which I assume is also the published version because it’s so lacking in polish and care.

The map at the start of the book really proves my point of how rushed this book was. 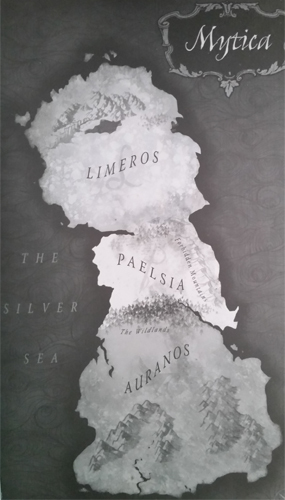 First, it’s almost a total copy of the map of Westeros from Game of Thrones in shape and size. Secondly, it is so devoid of information that it’s almost laughable it was included at all. I suppose I should have lowered my expectations for the worldbuilding right then and there, but alas I still let myself get my hopes up.

The land of Mytica is apparently divided into three separate realms, each with their own styles and belief systems. You’d never know it though, as every character from each realm talks and behaves in the exact same way. Sure, Cleo calls a few guys from Paelsia savages a few times, but there’s really nothing shown in the story to prove her point. I know that with YA some things have to fall by the wayside, but this is basic worldbuilding folks. Mytica felt empty, and inherently false as a result.

There’s a bunch of character deaths thrown in to keep the audience interested, but to be honest even that was boring. No one of any importance to the plot actually dies, and when a main character is in danger you can bet that there’s going to be a 5 page conversation that sucks the tension right out of that moment before anything actually happens. Even when a certain royal character is dying of a mysterious illness, there’s no tension because no surrounding characters seem to even care that it’s happening.

Everything lacked emotional heart and soul, and when that happens I check right out.

It certainly doesn’t help that I didn’t care an iota about any of the main characters. There’s this hawk flying around that gets mentioned in an offhanded way every few chapters that I cared more about than Cleo, Magnus, Lucia or Jonas. Each of them was whiny, selfish and extremely grating. None more-so than Magnus with his weird obsession with his sister.

It wasn’t endearing. It was creepy and controlling.

Game of Thrones this was certainly NOT. In the series this was written to emulate, characters are fleshed out and we can understand their choices, even if we can’t agree with them. The world is huge and rich and full of unique cultures that are shown to the reader, not told. In fact, you can find this sort of thing in many great fantasy series. This book pales in comparison to the majority of them, and I’d urge people debating picking this series up to turn pretty much anywhere else first.

We need to stop allowing media trends to tell us what to read. This might be the acclaimed YA answer to Game of Thrones, but do we really want to give a poorly written knock off that spot when there are more original and finely crafted stories out there just waiting to be discovered?