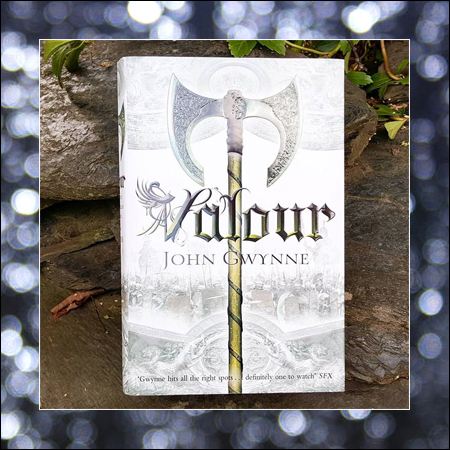 The world is broken… and it can never be made whole again.

Picking up where Malice left off, Valour is the first sequel to a dark epic fantasy adventure about ambition, greed and the depths of betrayal.

The Banished Lands have been torn apart by the tide of war as Nathair sweeps the realm, challenging all who oppose his holy crusade. Allying himself with the manipulative Queen Rhin has doubled his power, but Rhin has her own machinations at work in this quest for ultimate power.

Left for dead when her country is invaded, Cywen finds herself a pawn in Nathair and Calidus’ game, and must fight for survival as they set their sights on her brother – the last threat to their great power. Meanwhile, Corban and his own companions flee their conquered homeland, headed through yet more dangerous territory as they seek sanctuary. Corban continues to struggle with the implications of what everyone else believes him to be: the fabled Bright Star that will deliver the Banished Lands salvation.

Embroiled in political scheming and battles, the mortal world is unaware of a dark power rising in the Otherworld. A host of the Fallen are rising, seeking entrance into the mortal coil and to destroy the Faithful, once and for all.

Picking up exactly where Malice, left off, John Gwynne re-enters the epic fantasy foray with a stunning followup to his debut novel that I won’t soon forget.

Those who worry about picking up series written by a debut author, have no fear here because the story movement and character building here is just as lovingly crafted by Mr. Gwynne as it was in the first book. Whereas Malice is a bit slower in its delivery as it establishes the world, the characters and their places within it, Valour places its focus on getting that plot up and running, and from page one to the very end the characters are on the move, getting stuff done. There’s a real tendency for fantasy to have brief moments of action followed by hundreds of pages of exposition and incredibly slow movement. Here, Gwynne focuses on keeping his plot rolling within constant movement and action scenes instead, giving Valour an almost frenetic pace in keeping with the chaos the characters endure as their world descends into turmoil and death.

Sometimes in fantasy that is told through shifting POV, there is a tendency to repeat information or see the same scenes unfold through various eyes, which I think is one of the traps of multiple perspectives. Gwynne deftly avoids them here, using shifting perspectives to create a finely woven tapestry of tension that lends the reader a better understanding of why things are unfolding the way they are, without boring them along the way.

This entry to the series is darker than its predecessor in tone and content, as much of the world we come to love in the first book descends into war and political machinations. The real heart of the series continues to come from its characters. They are varied and well crafted, each presenting a distinct take on the world and situations unfolding through their unique POV chapters. I love them all, and the ancillary characters that surround them are just as easy to root for. When people are in danger or meet their demise here, it is always devastating and heartbreaking. The threat of my favorite characters being in danger created a very real compulsion for me to keep reading, to find out what was going to happen next.

While some plot points were a little too predictable for my taste, I do think that the overall movement, pace and thematic content present in the story was enough for me to overlook it and continue to enjoy the directions the story headed. Another aspect I particularly enjoy about Gwynne’s writing is his ability to describe battle scenes! They are always epic, easy to envision and extremely fast-paced. While some scenes are particularly brutal, Valour places its focus on the horrors of war, rather than glorifying in it.

I’m very excited to see where the series goes next. There’s some crazy plot movement in this entry to the series that I can’t wait to see built upon in the next book! Wherever the story goes next, I am certain that it will continue to be epic.