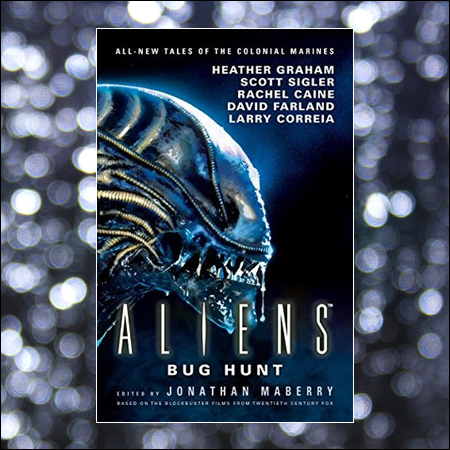 Ever since Ridley Scott’s Alien terrified audiences in 1979, the Xenomorph has remained an iconic movie monster that brought about the creation of a number of hit sequels. None more successful or enduring as the first of those sequels, Aliens. James Cameron’s take on the creature hoped to expand the scope of the universe with the introduction of the Colonial Marines: space-age infantry accompany Ellen Ripley as she faces down her worst nightmare once again.

In this expanded universe anthology, 18 stories tell new tales involving the Colonial Marines as they square off against the deadliest predator the universe can throw at them, along with other terrifying new foes. Aliens: Bug Hunt asks the reader to accompany the marines on new journeys into the darkest reaches of space; to alien worlds; derelict spaceships and even straight into the nests of the universe’s most dangerous monster.

I’m a bit split on this one. As a huge fan of the Alien franchise, this book seemed tailor made for me on the outside, but I wasn’t as captivated by some of the stories as the movies seem to make me.

Full disclosure, anthologies are not the first thing I tend to gravitate towards. I love novels because the page count generally allows for more time spent getting to know characters, their intricacies and the way their minds really tick. With short stories, it’s often much more difficult to really encapsulate all that background and growth into such a short amount of pages and still have a plot that really ticks. But, I needed something to read on my kindle and this one fit the bill at the time I happened to be searching for a new read.

There are at least two types of fans within this fandom.

There are those who really enjoy the slower, more subdued, cosmic horror aspects of Ridley Scott’s Alien – Where the creature is singular but extremely powerful and its presence on board a spaceship serves as a constant reminder of the danger and existential dread that the very idea of space invokes.

And then there are the fans of Aliens who tend to gravitate more towards this:

Mostly, they’re in it for the action and general badassery that is the Colonial Marines and Ripley as they bust skulls without bothering to take names.

The pace of most of the stories is frantic and more in line with that feeling of constant movement and action present in the second film. One complaint I had was that there just was not enough time to get to know many of the Marines that are introduced in their own stories. Their names are thrown into the fray, and we get a quick sketch of who they are, and then the remainder of the focus typically gets thrown back onto the creatures they’re tasked to face. It made it difficult for me personally to feel very invested in any of their lives or the danger they faced.

Had some of these stories been given the room to grow and breathe and really develop those characters, I think I would have enjoyed them more. There’s are some memorable new characters, but no one nearly as easy to love as Hudson or Hicks, or these two:

Also, can we just talk about the elephant in the room? I don’t consider this a spoiler as it’s revealed on the first page of each story where it occurs in: there are stories here involving characters that appeared in Aliens which felt awfully close to fan-fiction to me. I much preferred the more original stories that explored new ideas, new locales and new characters. My top 3 that did well at incorporating the theme of the colonial marines but not letting it define the full scope of the story had to be:

and Broken gets a special nod for actually coming up with a compelling origin story for everyone’s favorite Android, Bishop. This was definitely my favorite of all the stories involving existing stories.

The rest ranged for me from okay, to entertaining. As a fan of the franchise, I enjoyed this, but I think this is a prime example of why fans clamoring for another movie focused on the Colonial Marines should rethink that position. As fun as they were to watch in action once, there’s a real danger that another venture with them will descend into the same sort of similarity of storytelling that I think bogged down my enjoyment here. It’s all well and good to watch our favorite movie monster get mowed down by marines once, but when it happens over and over again, it begins to feel a bit like Starship Troopers and less like the Lovecraftian inspired horror franchise I fell in love with.

Yes, I’m ending on an Alien Queen gif, because when else am I going to have a chance to use it, really?

Do you love this franchise like I do? Have you read any of the books or comics? What about the audio-plays? I’ve heard there are a few that are stellar!