Redwall Abbey, the tranquil home to a community of peaceful mice comes under threat when Cluny the Scourage sets his sight on their home. A devious and demented bilge rat, Cluny is a warlord with a taste for violence and a reputation for relentless conquest. Worried for the safety of his home and friends, a young mouse named Matthias begins a quest to find a sacred weapon that might be the Abbey’s only hope for survival.

This book was actually one of the first chapter books I read as a child, but because that was so long ago and at the start of my life as a reader, my brain had pretty much deleted all of the details of it – save for the fact that I enjoyed it when I was young. I’m happy to report that I found the book just as enjoyable as an adult reader; perhaps even more so, for the aspects of it I’m sure I appreciate more as an adult reader that would have flown over my head as a child.

As a middle grade fantasy story, this is quite well done. Jacques centers the plot around Cluny the Scourge’s days-long siege of Redwall Abbey and uses this conflict to introduce some fairly standard fantasy tropes to young readers unfamiliar with the genre. Good vs. Evil; The Chosen One and Political Machinations between courts are all covered here in ways that remain faithful to the genre without boring the children that this series is written for. Particularly well done is the way the various woodland animals overcome their differences in order to work together against their common enemy, Cluny.

As an adult reader of this series, one thing I was surprised by was the way it does not flinch from violence or the devastating effects of warfare on the people who live and die during it. With a lot of middle grade books, there’s a tendency for authors to sort of skim over death, or fake the reader out before resetting everything to the way things were before. Here, Jacques unabashedly kills off characters left and right, and it makes for some pretty compelling reading. Knowing that the danger is real and permanent in this series ups the ante considerably. At times I felt like I watching an all-animal version of Game of Thrones, which I suppose makes Matthias the Jon Snow of his world? 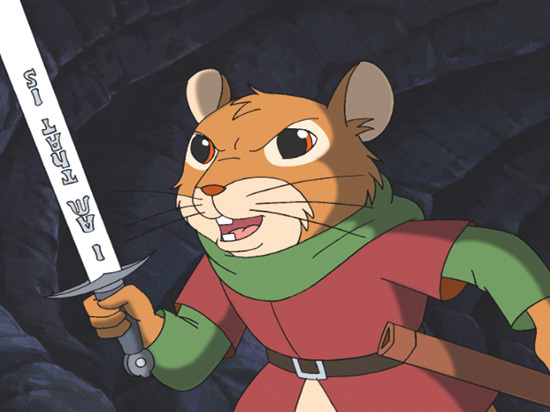 Speaking of the all-animal cast, I couldn’t help but wonder where humans factored into all this. It’s quite confusing to have riderless horsecarts and gigantic fortified Abbeys built from bricks and no mention of how they got there. Doing some digging on my own I read that Jacques intent was the show a world where humans didn’t exist at all, but I didn’t think that was particularly well conveyed given the fact that the entire cast called a place that would have been physically impossible for them to build their home.

The only other thing that brought my rating down was that in some moments it seemed as though the seriousness of the situation was forgotten by the characters. There were a number of moments where Redwall was under direct siege by the enemy, and certain characters were either eating or sleeping and otherwise unconcerned, which was a tiny bit frustrating. But these are minor complaints in a sea of other positives that makes it them very easy to overlook.

I love finding Middle Grade series that would speak to young boys in particular, as I think they are an oft-neglected demographic in the reading world. While the action, characters and plot movement in this series is sure to entertain most readers in any demographic, I think Matthias is a wonderful role model for young male readers in particular. I happily recommend this book to as a good starting point for fans new to fantasy.

What did you think of this book? Have you read any more of the series? Is it worth continuing?