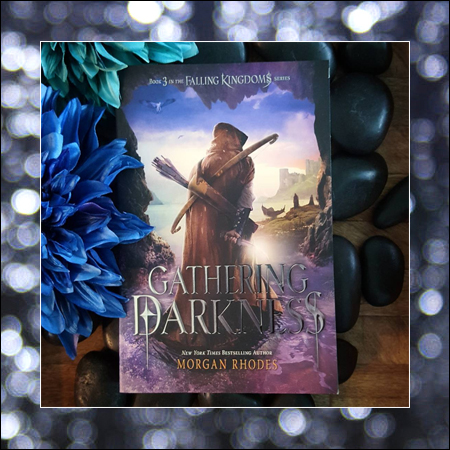 The third book in the Falling Kingdoms series, follows Cleo, Magnus, Jonas and Lucia as they continue their search for the Kindred, elemental magic gemstones that they’ve been searching for since book one and still haven’t managed to gather. New obstacles are thrown into their way as the Kreshians – royals from a neighboring land – and the Watchers – immortals from the Sanctuary – join in on the hunt and generally just be annoying.

Break out the bubbly for me friends, because I have finally escaped finished, this pure torture book!

Cut to me, wondering where all the glowing reviews for this series come from, because I just don’t get it.

There are so many better written YA series out there that I would recommend over this one, because this one’s got problems. It’s derivative to an extreme. Every plot point and character outline is lifted directly from Game of Thrones. You’ve got incestual siblings and their mean old dad who runs the world. You’ve got the downtrodden Stark daughter who has been separated from her family; and you’ve got the pure hearted do-gooders rebelling against those in power.

In this book, everything is painfully simplified. There is no nuance to Morgan Rhode’s writing. When she wants you to know that a character’s a bad dude, it’s going to be telegraphed 14 times in earlier chapters before the big reveal so that there’s absolutely no surprise. When she wants you to sympathize with a character she’s going to give that character a stock scene where they pour their heart out in an overly sappy monologue that fairly screams: “love him,”which only made me dislike them even more.

It feels like there’s no heart or soul to this series. No moral lessons underpinning the plot to make this series worth reading. It’s poorly plotted events and poorly drawn characters randomly bumping into each other over and over again and sometimes killing each other, which might be entertaining if it was well written. Spoiler alert: it’s not, so it was painful to read. And not just for me either.

The Fantasy League I was reading this series with fell apart trying to get through this book. It wasn’t from lack of trying – but rather a lack of a reason to care. This series killed off all our interest one by one like some horror movie slasher. By the time I finished it was like I’d just crawled out of the woods at the end of the movie, and I didn’t even get an “I survived” t-shirt to make it worth it.

I have to rant about the LGBT rep in this series. In my review for Rebel Spring, I brought up some issues with a particular male character who was revealed to be bisexual. For the record, it was not the fact that this character was revealed to be bisexual that annoyed me. It was the way the reveal was treated: shoehorned into the final 30 pages of the story and the way it played out read more like sexual assault of an intoxicated character, rather than a romantic reveal.

Regardless, because Rhodes had already committed to the storyline at the end of the last book, I went into this one looking forward to seeing how it played out. It’s more than disappointing.

It’s badly handled and almost offensive to me as a gay man, because it’s pretty clear Rhodes had no intention of showcasing a M/M romance in the same way she does her straight pairings.

Keep in mind, at this point in the series Cleo has kissed every leading male character, including some of the ones that are now dead. Straight characters hook up left, right and center in this series while the M/M relationship stagnates and the characters dance around each other, never saying what they mean or expressing real romantic feelings for one another.

Frankly, It’s not even a M/M relationship. It’s a subplot that was shoehorned in for diversity rep by an author who clearly had no intentions of showcasing it in the same way as she does her straight relationships. It’s like someone told Morgan Rhodes that LGBT rep was profitable in the YA community and included the storyline only to draw in those readers, with no real intention to ever do anything with it. To drive that point home, she ends the relationship in no uncertain terms before either character really expresses true feelings to one another.

Seek out other books if you’re looking for a well-written LGBT romance. There are plenty of other YA books out there where the author actually wants to write those relationship dynamics. Really, I don’t know why I expected more.

Reaching the end of this review, I can feel the weight lifting right off my shoulders because I an finally done with this book, and this series. I won’t be reading the rest because I couldn’t care less what happens next. To be quite honest, I’ll likely be avoiding Morgan Rhodes books’ in general in the future.

There’s lots of great YA series out there. Give one of those a shot before spending money on this one.

🌟✩✩✩✩ = 1 star, because Goodreads won’t let me give less.