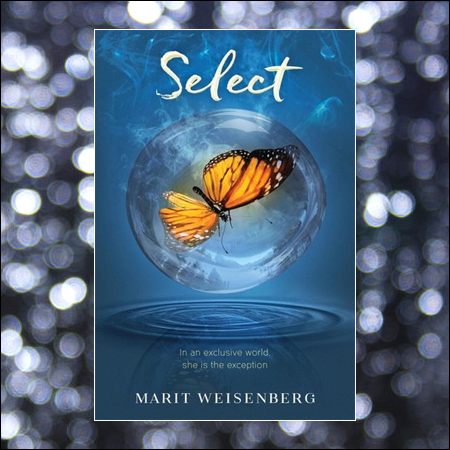 Coming from a race of highly-evolved humans, Julia Jaynes has the perfect life. The perfect family. The perfect destiny. But there’s something rotten beneath the surface—dangerous secrets her father is keeping; abilities she was never meant to have; and an elite society of people determined to keep their talents hidden and who care nothing for the rest of humanity. So when Julia accidentally disrupts the Jaynes’ delicate anonymity, she’s banished to the one place meant to make her feel inferior: public high school.

Julia’s goal is to lay low and blend in. Then she meets him—John Ford, tennis prodigy, all-around good guy. When Julia discovers a knack for reading his mind, and also manipulating his life, school suddenly becomes a temporary escape from the cold grip of her manipulative father. But as Julia’s powers over John grow, so do her feelings. For the first time in her life, Julia begins to develop a sense of self, to question her restrictive upbringing and her family prejudices. She must decide: can a perfect love be worth more than a perfect life?

Marketing itself as a YA SFF, the synopsis for Select promises genetically enhanced humans with unnatural abilities, elite societies and a strong female character who actively works to subvert her upbringing and create her own destiny.

Unfortunately, Select barely lives up to its premise, casting aside all of that interesting stuff that drew me to it in favor of a plodding and poorly developed romance that I just couldn’t get into. Fans of Contemporary Romance might actually find something to appreciate in this book, but as I’m not a fan and really came for the SFF elements, I was sorely let down.

Allow me break it down:

What is Julia and her group, exactly? I read this entire thing and I still don’t have half a clue. You’d think that a first-person narrative would allow this sort of information to be conveyed clearly and concisely early on so that I wasn’t scratching my head for half the book. Are they evolved humans?
Aliens? Magical creatures? Who knows. All that was clear before 50% was that Julia and by extension, her people, were special.

Then, when the author finally tries to clear up their lineage via an infodumped news-article about them around halfway through, it just gets more confusing!

They’re meant to be evolved humans, but Julia then follows that up by clearly stating that they’re not human at all, but rather a different species and the result of… inbreeding? No, seriously, Julia admits at one point that she and her people are the result of geographic isolation and inbreeding.

Except in this world, all these inbred humans become gorgeous, intelligent, powerful and successful millionaires and celebrities. Julia describes the boys in her group in the first paragraph, and the beauty of her first boyfriend in the second:

“They were deeply attractive, but they appeared hardened now with their abundance of tattoos and scars.”

“He definitely looked like an angel gone bad, with his curls and fierce gaze in his icy blue eyes. Actually, he looked a lot like my dad.”

Whereas this would probably be more accurate:

Like I said, I was drawn to this book because of all the SFF elements in the synopsis, so when I was reading I kept waiting for all the cool sci-fi action to kick in. Well, not only does that not happen, but the sci-fi elements barely even propel the plot. Julia belongs to this super special society in which they have abilities. The group is split into 2 smaller groups of teenagers. One group is more powerful and reckless than the other. When Julia saves her sister from drowning at a lake, she is punished for potentially exposing them and given the unenviable task of being cast out of private school and having to attend a public high school.

It’s made even worse when Julia’s inner monologue constantly reminds the reader how special her kind is. They are reckless and constantly risk exposure in thrill seeking. They are billionaires and millionaires and literal celebrities. They all look similar due to their shared genetics/inbreeding, and have to relocate every few years because all these things put them at constant risk of exposure. Hence why Julia being cast out in the first place is just not compelling. Like at all.

Full disclosure, contemporary romance is not my jam, though I might not have minded it featuring so heavily here if it hadn’t felt so cliche. I swear that this book had to have been written as a straight Contemporary romance in an early draft, but was re-worked into SFF in a later draft when someone pointed out that the dynamic between Julia and John is just too perfect. From the moment they meet, they’re connected on a spiritual, emotional and even a telepathic level. Julia knows what John is thinking – but only when it serves the plot, otherwise that power comes and goes.

Every single little moment is designed to get them alone together and advance their romance. There’s less plot in this book than there is romance. And it doesn’t even feel like it develops naturally. John is fascinated by Julia because she’s a super special snowflake and beautiful. Julia is interested in John because… it served the plot to have her connect with a human man. Seriously, that’s the only reason.

They have nothing in common, and fight as much as they kiss, but they always make their way back to each other thanks to moments like this:

“For one microsecond we paused the way you do when you have a crush on someone or something unspoken between you. I turned and began to walk away slowly, tuned into his thoughts, knowing how he was thinking how startlingly blue my eyes were.”

This book commits a few cardinal sins when it comes to delivering backstory about the characters and the plot. As a first person narrator, Julia has the perfect opportunity to just tell us what she knows about events, but instead she has to read full articles (which we readers read through her) about her own father and her own people in order to figure out what exactly is going on with their powers.

Similarly, when information about a character needs to be conveyed in conversation, it sort of happens like this:

A: This year’s been really hard on him.
B: Oh, that’s right. But how did he get to this point again?
A: Remember, he had that thing happen to him before the story started and came home.
B: Oh, now I remember. But he was a straight A student with a promising sports career before he got injured!
A: Yeah. It’s really sad.

Why are these characters, who are totally familiar with this character, having this conversation about what happened to him over the last year? It’s only for the sake of the reader who is unfamiliar. It doesn’t ring true to life.

This is a minor pet peeve of mine, but it features heavily enough in the story that I had to mention it. Julia always refers to her dad in her monologue by his name, Novak, rather than just calling him “dad.” At first I thought she had some sort of issue with her dad and refused to call him dad, but nope – she does during conversations with and about him. The narration just refers to him by his name so we never ever forget it, but it just doesn’t feel like a voice coming from a real teenage girl.

I hate to rant, but I was really hoping for more from this. If you like contemporary romances, you just might find something worthwhile here. If you’re a fan of sci-fi and fantasy elements impacting the plot, keep looking because this one wasn’t worth the effort.

Thank you to Netgalley and Charlesbridge Teen for an ARC of this book!

Quotes used in review may well be changed for final published copy of the book.