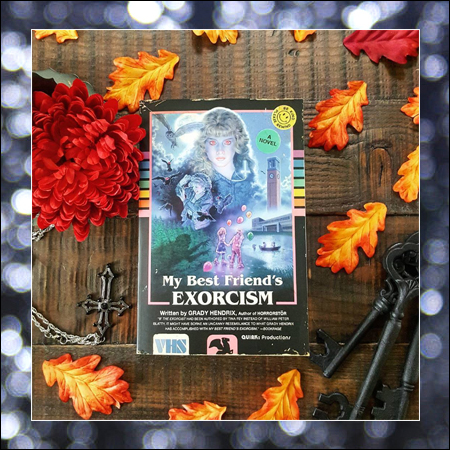 A heartwarming story of friendship and demonic possession. The year is 1988. High school sophomores Abby and Gretchen have been best friends since fourth grade. But after an evening of skinny-dipping goes disastrously wrong, Gretchen begins to act…different. She’s moody. She’s irritable. And bizarre incidents keep happening whenever she’s nearby. Abby’s investigation leads her to some startling discoveries–and by the time their story reaches its terrifying conclusion, the fate of Abby and Gretchen will be determined by a single question: Is their friendship powerful enough to beat the devil? Like an unholy hybrid of Beaches and The Exorcist, My Best Friend’s Exorcismblends teen angst, adolescent drama, unspeakable horrors, and a mix of ’80s pop songs into a pulse-pounding supernatural thriller.

This was such a unique blend of 80s movie nostalgia, comedy and horror movie tropes. Grady Hendrix’s My Best Friend’s Exorcism is nothing if not a wonderful ode to all that made horror of the late 80s and early 90s so great.

From the chapter titles that are all 80s song titles, to the pages rife with pop culture references from the 1980s, this book is a wonderful tribute to all that made that era so memorable. I was unfortunately born too late to enjoy that decade myself, but I’m a huge fan of basically all the movies and music from that time period, and San Junipero is my life and street cred.

Back to the book, as a lifelong fan of horror movies, I remember many a night spent as a kid watching my favorite horror movies from that decade again and again. In many ways, this book transported me back to those days where I discovered horror for the first time, and for that I’m incredibly grateful for it.

Not only is Hendrix great at emulating the things that made that era so memorable, he’s also a damn funny writer. Make no mistake, this is camp horror at its finest. It’s like The Exorcist and the Scary Movie franchise had a baby, and My Best Friend’s Exorcism is the resultant child. I found myself laughing way more than I expected, and at humorous jokes that I felt were really well developed and conveyed.

As great as I found the nostalgia and the humor, I was a bit let down by the actual horror. I don’t know if I’ve just become jaded by years spent as a horror fan, but aside from one or two really disturbing scenes I found very little of it truly scary.

There wasn’t enough permanence in the horrific moments for me to really call it horror. One of the things about horror movies and moments that are memorable is that they become horrific because they are moments a character can’t come back from, or are irrevocably altered by. Here, it seemed like Hendrix was afraid to take that final, necessary step to solidify the scares. It felt a bit like watching a made for TV afternoon special. It works I suppose for YA horror, and is entertaining in a cursory way, but it didn’t have compelling enough moments to make it really memorable like other great horror examples from that era.

There also was a question that remained of how exactly Gretchen became possessed in the first place that irked me. Was it drugs that did it, or was it something the character encountered while she was lost in the woods? It’s never explained and I think it detracted from the scary. A good possession story needs to have a source, otherwise it just feels like too much convoluted happenstance.

On a more positive note, there is a great thematic arc present here about friendship. New friends, old friends, long-lost friends and the power of best friends to overcome even the seemingly insurmountable.

The beginning chapters and ending chapters of the book were actually my favorite parts, because of how strongly they developed Abby and Gretchen as characters and the power of their friendship. Hendrix took the time to paint both these characters in such vivid shades that I cared about both of them. Their friendship was the highlight of the novel for me.

Fans looking for a dose of nostalgia for Halloween are sure to love this. I’ll be keeping an eye out for more offerings from Hendrix in the future!

Have you read any other books that rely heavily on 80s or 90s nostaglia? I’m kind of obsessed with this book just for that factor alone and would like to discover others with that same feeling, even outside the Horror genre.