Deep in the jungle of Peru, where so much remains unknown, a black, skittering mass devours an American tourist whole. Thousands of miles away, an FBI agent investigates a fatal plane crash in Minneapolis and makes a gruesome discovery. Unusual seismic patterns register in a Kanpur, India earthquake lab, confounding the scientists there. During the same week, the Chinese government “accidentally” drops a nuclear bomb in an isolated region of its own country. As these incidents begin to sweep the globe, a mysterious package from South America arrives at a Washington, D.C. laboratory. Something wants out.

The world is on the brink of an apocalyptic disaster. An ancient species, long dormant, is now very much awake.

“You think because you kill one spider in your bathroom, that there aren’t others hiding somewhere in your house?”

What is it about spiders that strikes fear in so many people? Is it the legs, or their hairy bodies, or their ability to attack with a sneaky drop-shot from a hidden web in a corner or on a ceiling? I think it’s probably a bit of all of the above for me. Ever since I was a kid and a large wolf spider ended up hitching a ride on my sweater in my parent’s woodshed, I’ve been pretty much terrified of them.

It was with complete trepidation that I even picked this book up at all, but I said I wanted a few scary reads for October, and Ezekiel Boone’s novel definitely fits the bill.

Boone builds off of all that we as human beings find so unnerving about spiders in the first place and cranks it up to an eleven in this apocalyptic thriller where the end comes not in meteor strikes or volcanic explosions, but in waves of black-bodied, carnivorous spiders that are hungry for human blood.

One great thing about this novel is the way Boone subverts your expectations when it comes to the spiders. There were a few disturbing revelations about the way these spiders work that left me seriously grossed out and looking over my shoulder while I was reading for any sort of creepy crawlies that might have been trying to invade my bubble. Lord knows I’ll be giving any spiders I come across in my house an even wider berth for awhile after reading this book!

Told in short and alternating POV chapters, Boone uses the viewpoints of connected characters across the globe to give his readers a front row seat at the start of the pandemic as things quickly move from bad, to worse, to horrifying. I could easily envision this story being translated into a blockbuster format. The only problem I had with it is that it the ending sort of lands with a thud as Boone implies that the worst is yet to come. It’s almost like watching the first 50 minutes of a Michael Bay film or other disaster movie only for the credits to roll before we’ve even gotten the inevitable scene of the statue of liberty getting toppled to really show the audience how bad things have become.

That being said, there was a hell of a hook for the second book, so I suppose Boone gets the last laugh there!

I had a minor issue with a couple of POV characters being underdeveloped, or underutilized. Shotgun and Gordo, a gay/straight survivalist duo were my favorite characters, and there just aren’t enough chapters with them.Meanwhile, Kim and Melanie got a few more chapters afforded to them than I think they necessarily needed and their voices weren’t quite as distinct as I would have liked. I have high hopes for book 2 though, because I have a feeling some of these side characters are going to spin into the limelight which would pick things up a bit.

Similarly, don’t expect many answers as to the origin of the spider invasion, at least not quite yet. Boone definitely focuses more heavily on fast-paced action and gross-out scenes to advance the plot quickly while leaving the larger explanations for future installments in the series. There were a few scenes in the beginning of the novel that seemed to imply some source thousands of years in the making, but the where, how and why are forgone conclusions in favor of focusing on the action and terror that are man-eating spiders.

If you’re looking for a good gross out scare and think you can stomach the feeling of heebie-jeebies that thinking about spiders seems to inspire in me and so many others, I’d say definitely give this book a go! I’m excited to pick up the sequel soon.

Sorry for all the scary spider gifs! Here’s a cute little spider showing his pride with an adorable raindrop hat to cheer you up! 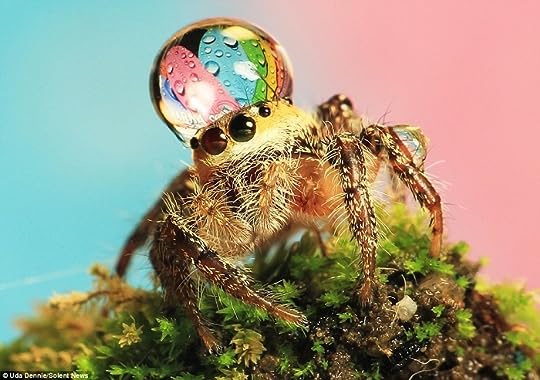 20 thoughts on “{Review} The Hatching by Ezekiel Boone”