The main book I’m reading this week is To Kill a Kingdom by Alexandra Christo. I’m about 50% through it so far! I’m enjoying the swashbuckling adventure at its heart, but I’m having some difficulties connecting with the characters right now. I think reviewing this might end up being a challenge!

Princess Lira is siren royalty and the most lethal of them all. With the hearts of seventeen princes in her collection, she is revered across the sea. Until a twist of fate forces her to kill one of her own. To punish her daughter, the Sea Queen transforms Lira into the one thing they loathe most—a human. Robbed of her song, Lira has until the winter solstice to deliver Prince Elian’s heart to the Sea Queen or remain a human forever.

The ocean is the only place Prince Elian calls home, even though he is heir to the most powerful kingdom in the world. Hunting sirens is more than an unsavory hobby—it’s his calling. When he rescues a drowning woman in the ocean, she’s more than what she appears. She promises to help him find the key to destroying all of sirenkind for good—But can he trust her? And just how many deals will Elian have to barter to eliminate mankind’s greatest enemy?

I also started Awakened by James S. Murray and Darren Wearmouth. I’m only a few chapters into this so far, though I will say that this book really hits the ball running. Like seriously, chapter 1 and the plot is already well underway. I’m interested in seeing where this monster mystery goes.

After years of waiting, New York’s newest subway line is finally ready, an express train that connects the city with the burgeoning communities across the Hudson River. The shining jewel of this state-of-the-art line is a breathtaking visitors’ pavilion beneath the river.  Major dignitaries, including New York City’s Mayor and the President of the United States, are in attendance for the inaugural run, as the first train slowly pulls in.

Under the station’s bright ceiling lights, the shiny silver cars gleam. But as the train comes closer into view, a far different scene becomes visible.

All the train’s cars are empty.

All the cars’ interiors are drenched in blood.

As chaos descends, all those in the pavilion scramble to get out. But the horror is only beginning. High levels of deadly methane fill the tunnels. The structure begins to flood. For those who don’t drown, choke or spark an explosion, another terrifying danger awaits—the thing that killed all those people on the train. It’s out there…and it’s coming.

There’s something living beneath New York City, and it’s not happy we’ve woken it up.

Last week I finished and reviewed Nevernight by Jay Kristoff. This was an absolutely incredible read! It breathed new life into fantasy in my humble opinion. I’m so excited to see where the sequel goes very soon!

In a land where three suns almost never set, a fledgling killer joins a school of assassins, seeking vengeance against the powers who destroyed her family.

Daughter of an executed traitor, Mia Corvere is barely able to escape her father’s failed rebellion with her life. Alone and friendless, she hides in a city built from the bones of a dead god, hunted by the Senate and her father’s former comrades. But her gift for speaking with the shadows leads her to the door of a retired killer, and a future she never imagined.

Now, Mia is apprenticed to the deadliest flock of assassins in the entire Republic—the Red Church. If she bests her fellow students in contests of steel, poison and the subtle arts, she’ll be inducted among the Blades of the Lady of Blessed Murder, and one step closer to the vengeance she desires. But a killer is loose within the Church’s halls, the bloody secrets of Mia’s past return to haunt her, and a plot to bring down the entire congregation is unfolding in the shadows she so loves.

Will she even survive to initiation, let alone have her revenge? 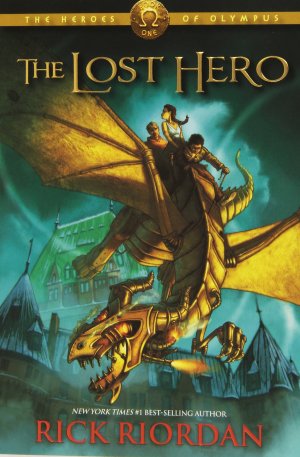 I’m sort of at the point where I’m between ARCs after I finished Awakened, so that means that my next read can be a passion project – something that’s been calling to me for awhile now.

Ever since I finished and reviewed the Percy Jackson series last year, I’ve been dying to move on to Riordan’s Heroes of Olympus series! The Lost Hero is the first book in the series, and I can’t wait to begin this next great adventure!

Jason has a problem.
He doesn’t remember anything before waking up in a bus full of kids on a field trip. Apparently he has a girlfriend named Piper, and a best friend named Leo. They’re all students at a boarding school for “bad kids.” What did Jason do to end up here? And where is here, exactly?

Piper has a secret.
Her father has been missing for three days, ever since she had that terrifying nightmare about his being in trouble. Piper doesn’t understand her dream, or why her boyfriend suddenly doesn’t recognize her. When a freak storm hits during the school trip, unleashing strange creatures and whisking her, Jason, and Leo away to someplace called Camp Half-Blood, she has a feeling she’s going to find out.

Leo has a way with tools.
When he sees his cabin at Camp Half-Blood, filled with power tools and machine parts, he feels right at home. But there’s weird stuff, too—like the curse everyone keeps talking about, and some camper who’s gone missing. Weirdest of all, his bunkmates insist that each of them—including Leo—is related to a god. Does this have anything to do with Jason’s amnesia, or the fact that Leo keeps seeing ghosts?