Beyond Redemption by Michael R. Fletcher 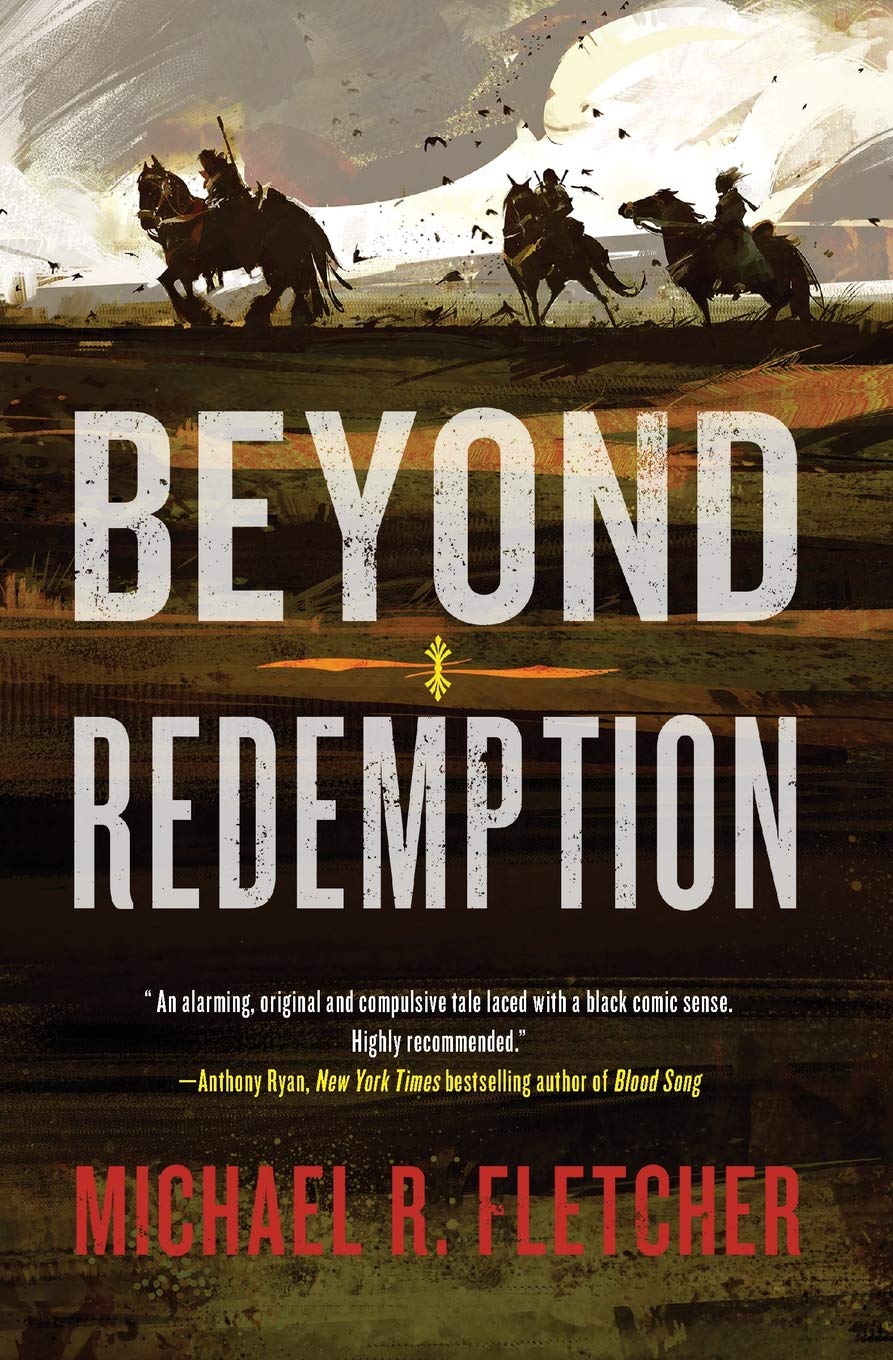 Violent and dark, the world is filled with the Geisteskranken—men and women whose delusions manifest, twisting reality. High Priest Konig seeks to create order from chaos. He defines the beliefs of his followers, leading their faith to one end: a young boy, Morgen, must Ascend to become a god. A god they can control.

But there are many who would see this would-be-god in their thrall, including the High Priest’s own Doppels, and a Slaver no one can resist. Three reprobates—The Greatest Swordsman in the World, a murderous Kleptic, and possibly the only sane man left—have their own nefarious plans for the young god.

As these forces converge on the boy, there’s one more obstacle: time is running out. When one’s delusions become more powerful, they become harder to control. The fate of the Geisteskranken is to inevitably find oneself in the Afterdeath.

The question, then, is: Who will rule there?

Wow did I sleep on this one or what?!

I mean, what an absolute smash this book is! I’m only sorry that it’s been sitting untouched on my bookshelf for so long, because this book had everything I look for in a fantasy novel: darkness, death, betrayal, and one hell of an epic world to get lost in.

The older I get, the more I appreciate grimdark fantasy for all the exploring it allows authors and creative types to do within the genre. Gone are the princesses and noble knights filled with valour. There’s no space for them – especially not in this book. Fletcher decisively settles this book in the muck and the mire of his world – and to great effect. The main characters are thieves, lunatics, and murderously destructive in their narcissistic schemes to advance their own place in the world.

Fletcher does an awesome job both at introducing the world, and carefully identifying each character’s place within it. By making each character’s end goal clear at the very start, Fletcher masterfully sets them all at odds with one another. It made for a very tense read! You see the danger each character is about to walk into before they do, but it’s never boring because Fletcher is also really great at subverting expectations along the way.

Speaking of the world, we’ve got to back just so I can bask in how amazing it is for a moment longer. Inspired by Germanic language, Fletcher’s world is filled with unique sounding places, people and classifications for those therein. The scope, detail and creativity that must have gone into creating all this was amazing. I was reminded in a lot of ways of Jay Kristoff’s Nevernight, another grimdark fantasy novel with a very memorable setting. If you enjoyed that novel, you absolutely must give this a go!

The magic system was so unique and creative as well. Tying each character’s powers to their sanity was a really daring choice, but it allows for the plot and characters to move in directions you as the reader never see coming. How can you guess what’s going to happen next in a world where the very fabric of reality is tied to the character’s sanity and belief system? Answer: you can’t – so just enjoy the ride.

Lastly, I wanted to touch on the characters. I know earlier I pointed out they’re all thieves and murderers, but there’s definitely a sliding scale in terms of anti-hero vs. antagonist going on here. Some are downright evil, whereas the ones you want to root for are those living just beyond the path of redemption.

You all know that I love my strong characters, (especially strong female characters) and this book has them in spades. Stehlen, Bedeckt and Gehrin were all so perfectly, wonderfully developed. Each was flawed, and looking out for themselves, but they had a lot of heart and I found myself rooting for them in their own weird way.

All in all, this has to be one of the most unique and exciting books that I’ve read in ages! I was especially delighted upon finishing to realize that this the first book in a series, because I did not want this to end! You can expect reviews for the next two books as soon as I can get my hands on them.

In the meantime, let me just say: if you’re going to give any underrated gem your time this year – let this be the one.

Have you read this? What did you think of it? What other grimdark fantasy tales are a must for you?

21 thoughts on “Review | Beyond Redemption by Michael R. Fletcher”