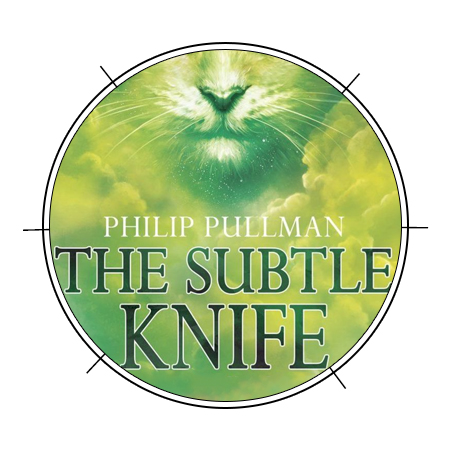 Lost in a new world, Lyra finds Will—a boy on the run, a murderer—a worthy and welcome ally. For this is a world where soul-eating Specters stalk the streets and witches share the skies with troops of angels.

Each is searching—Lyra for the meaning of Dark Matter, Will for his missing father—but what they find instead is a deadly secret, a knife of untold power. And neither Lyra nor Will suspects how tightly their lives, their loves, and their destinies are bound together… until they are split apart.

Last month I read and reviewed The Golden Compass, so I could prepare myself for the HBO/BBC adaptation that will be coming out next year. This was a series that I’d missed out on as a kid, and truth be told I was a little bit wary about starting them as an adult. Luckily, the first book in this series knocked my socks off, and this sequel followed in its footsteps and actually improved upon the original – in my opinion!

The Subtle Knife picked up immediately where the first book ended, with Lyra waltzing out of one plane of reality and into another. From page one, Pullman packs this book with near nonstop wonder, intrigue, danger and excitement!

It was actually quite surprising to see the ways in which this series has evolved from book one to two. Who knew that a book following a child’s exploration into the arctic alongside her polar bear guardian to find her uncle would turn the tables so many times and end up becoming a universe-hopping fairytale filled with so many memorable characters?

One of my absolutely favorite types of fantasy staples is the idea of portal fantasy – a function which allows one character to step from a familiar world into ones that are mysterious, dangerous and filled with wonder.

Pullman takes that premise and expands upon it – and no, there’s no blue box required for interdimensional travel. Lyra’s universe has become a multiverse, one in which multiple worlds are converging on top of each other – basically meaning that anything is possible now in terms of where this story is headed.

As much as I liked the adventure in the first book, I found this one even more exciting! My main issue with the first book was the way it starts. The reader is dropped right in the middle of a very important scene, given no context for anything and no idea what to consider important or not. It made for a really confusing start.

Because the basics have already been told, this book was much clearer and more exciting from page one. The action and plotting felt tighter here, and I was overjoyed at the inclusion of Will – a new character to this book. He was a perfect foil for Lyra. I loved the way that they played off of one another, and how close they became as the result of actions within the plot.

The one aspect of this book that I struggled with from time to time is the dialogue. I just don’t really care for the way Pullman has his character’s speak to one another. They’re not so much engaging in dialogue as they are speechifying in long monologues said without pause, and then the next character picks it up right afterwards with a dramatic speech of their own.

It seems to be less a fault of the writing than it is a stylistic choice of the narrative though, so I can’t fault it greatly. There are just a few moments during these exchanges that I felt a bit pulled out of things, wondering when the next character was going to speak.

Like the last book, this one is surprisingly dark considering it’s marketed for children and teens. There was one surprisingly affecting scene that moved me way more than I expected it to, so good one for you there Mr. Pullman. I’ll guard my heart a bit more carefully going in to book 3!

This was a great read. It taught me to expect nothing and absolutely everything in the final book of this series. Can’t wait to start it next month!

Have you read this series? What did you think of it? Have you seen the trailer for HBO’s His Dark Materiels yet? If not, watch it below! It looks sooooo good, and really faithful to the first book!

8 thoughts on “Review | The Subtle Knife by Philip Pullman”